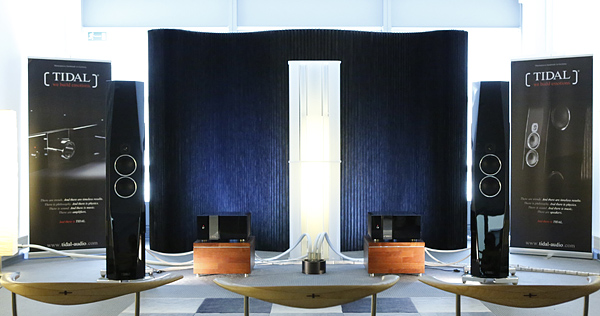 "TIDAL loudspeaker designer Jörn Janczak had given me advance notice of his newest loudspeaker in the Agoria, well before the Munich show, but I was still caught off guard over this tall and handsome transducer. The Agoria looks like a cross between TIDAL's top -of-the-line Sunrays and Contriva Diacera, sports two 11" side-firing woofers and three 11" sub-bass drivers -one rear firing. Of the seven speakers Janczak makes, this he says " ...is the first speaker with a cabinet made out of TIRALIT™, an all exclusive TIDAL cabinet material, which combines ultimate stiffness and resonance control.

This wasn't the first time I heard TIDAL through their own electronics but I think this was a first for me in terms of this quality of sound. Using their own Impulse amplifiers and Presencio preamp, but also an Aurender music server from Widealab of Korea and Argento Flowmaster series cables, AC cords and connectors, I immediately fell for the sweetness of strings and voices coupled to a level of dynamics I had not experienced here in Munich."

Jorn Janczak from TIDAL debuted his gorgeously built Agoria loudspeakers and electronics that included their new Impulse Reference dual mono amplifiers, the Preos-D Preamplifier with MC-phono and the Presencio 3 stack balanced Reference preamplifier (with a fully regulated power supply).
In many ways, the Agoria looks like a smaller version of their statement Sunray loudspeakers.
In terms of performance, I found them stunning. Particularly in their ability to provide a three dimensional soundstage here at a trade show no less. The stage was as wide as it was deep with wonderful contrasts of dynamics.