TIDAL was exhibiting at the CES 2011 in Las Vegas 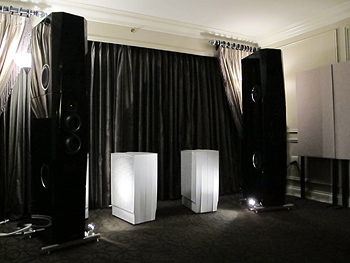 "...“Go check out the Constellation Audio room,” said Jon Iverson. So I did. As I entered the room filled with unworldly looking gear I spied Michael Fremer, engrossed in one of his famous mix CDs, burned from his vast vinyl collection. Michael, ever the gentleman, relinquished the sweet spot to me and both of us took in some big, clean, transparent sound. Driving a pair of TIDAL speakers was Constellation’s Hercules amplifiers, which are each able to put out a kilowatt of juice into 8 ohms and runs its first 250W in class-A.

Internally the amps mechanically float the sensitive signal carrying parts. That attention to vibration damping could be heard as stillness and ease, particularly when I played a high-resolution file of Robert Silverman playing the final fugue from Brahms’ Variations on a Theme by Handel. My time in the Constellation room was stellar."

“TIDAL stands at the very top of the industry…”