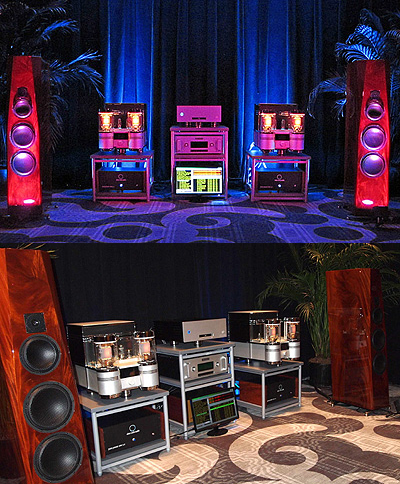 "Audio Power Labs: they must be selling some of them or gotten a capital infusion because their demo equipment keeps getting better and better with each show... TIDAL Contriva Diacera SE loudspeakers, which I would give my right arm and then some to own. Frighteningly good sound."

The sound in this room, then, was pretty and remarkable. Bass wasn’t the deepest I’d heard at AXPONA (that was the Martin Logan room), but it was tight and fast. In fact, everything was tight and fast. And luscious. Imaging was spot on, detail was there when it was there (if that makes sense), and air was extensive and enveloping. I do love that TIDAL sound. Mmm, mmm.
Great room, great sound and one that I was happy to return to over and over again during my too-brief stay. Well done."

Although Misty Ellis' atmospherically lit room was a challenge to photograph, the sound this company from Columbus, OH put together from a big-bucks system headed by the Audio Power Labs 833TNT 200W transformer-coupled monoblocks, TIDAL Audio Contriva Diacera SE floorstanding speakers and Laufer Teknik The Memory Player 64 was as tantalizing and satisfying as its visuals.

On my second visit, I was won over. An unfamiliar track, Richard Bona's "Reverence" from the album Cameroon, sounded superb. Then we turned to one of my trusty reference standbys. With the room as dark as it was, yours truly inadvertently pulled out the second disc of the two-disc Mahler set, which begins with the third movement of the five-movement symphony. Once over my surprise at hearing the wrong movement, I settled in to listen to the entire thing. It was that enjoyable. ...this system did so much so well that it earns a deserved place on my AXPONA Top 4 list."

AVGUIDE:
"In concert with Laufer Teknik’s The Memory Player 64 driving TIDAL Contriva Diacera SE speakers the sonics were airy, quick, with a pleasant warmth factor. In spite of the massive scale of the amps, ponderous was not part of this system’s finesse-fueled vocabulary.Confessions of a Part-Time Audiophile:
"I’ve heard various TIDAL speakers over the last year or so and I have to say, they’re on The List Of Things To Get When I Become Rich Enough To Afford Them. Actually, from that lineup, the Sunrays take top billing on that list.