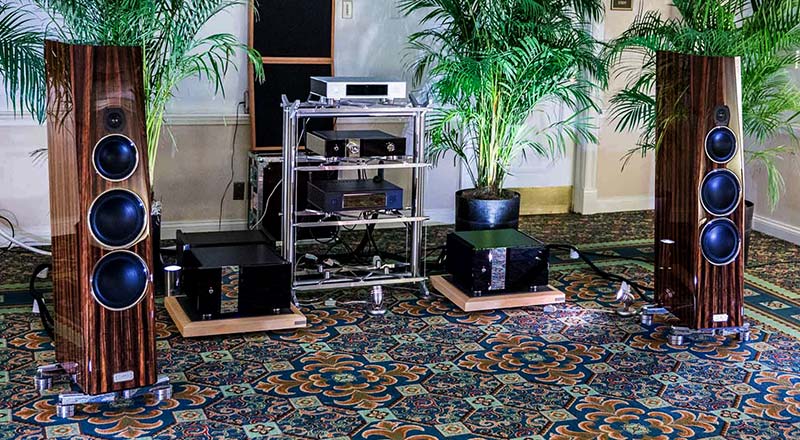 "Which is to say, “Best I’ve Ever Seen” (and yes, that includes some infamously expensive loudspeakers coming out of England). There’s this expansive depth to the finish which is startling. I’m not a fan of “glossy”, but this isn’t. This is liquid. As in, “still wet”. Touching it is more than a little obscene... So, putting aside thoughts of affordability (and ruthlessly squashing wild ideas about raiding college funds), I sat down to let the sound wash me away... So, when I say I was gobsmacked, do take that familiarity into consideration. This was incredibly heady stuff. Ethereal … delicate … insightful. And then, on a dime, wildly bombastic. This is why we get into audio, folks. Right here. This is a reference for Absolute Sound."
(Scott Hull, Parttimeaudiophile.com)

“First of all, that the TIDAL equipment was radically beautiful to see, and a smokin' knockout to hear' What workmanship in both domains ... a real reference standard for how things should be. Sonically, the sheer scale and dynamics of the music in this room was bloody extraordinary. The electronics might have been new to North America, but the effect was "Audio Oasis ! Award material" all the way. The sound was effortless, fluid, natural, organic, and had the sort of transparency that I associate with only the finest sort of designs that l've encountered on this planet Detail without edginess; dynamics without loss of control; full-frequency-range presentation without humps or valleys.” (Dr. David Robinson, Positiv Feedback Online) 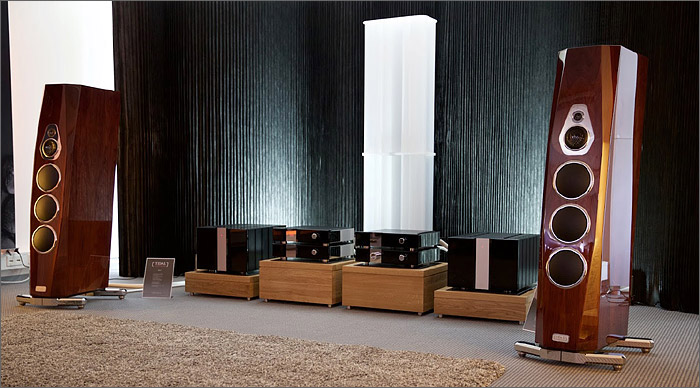 "Of course, this being Munich, the Vox Olympians were far from the only extravagant speaker system on show. After getting everybody all excited last year by announcing a diamond-midrange speaker, only to deflate that expectation by showing it sat in a display case, TIDAL redeemed themselves this time around with not one but two speaker models using the driver.
The system playing was the "more affordable" of the two, the Akira, featuring just one of the exotic 5" drivers per channel, naturally paired with a 1.2" diamond tweeter. The midrange driver itself is similar in design to a massive tweeter, driven by a circumferential voice coil with an annular-ring motor structure that is specifically designed to avoid rear reflection.

That’s an expensive setup, even if it’s still comparatively modest by Vox Olympian standards. But musically speaking, the performance didn’t disappoint. Utterly seamless, it was fluid, unforced, expressive and finely nuanced. Intricate and delicate when necessary, it was also capable of remarkable power and sudden dynamic shifts when necessary. Subtle musical shadings and textures were explicit without being exaggerated, and the Akira made a powerful argument for its exotic driver technology.
Once again, TIDAL were one of the few companies that showed a traditional big-box, wide-bandwidth system and made it work. Once again it got better as the show went on, but past experience made sure I went back on Sunday and sure enough, the resulting musical coherence and astonishingly lucid performance were more than worth the wait.
For those who find the Akira disturbingly affordable for a serious high-end speaker, there’s always the "If you have to ask" La Assoluta, with its twin-diamond-midrange driver array, a speaker that’s actually taller than its designer, Jörn Janczak -- and that’s saying something!" (Roy Gregory, Theaudiobeat.com) 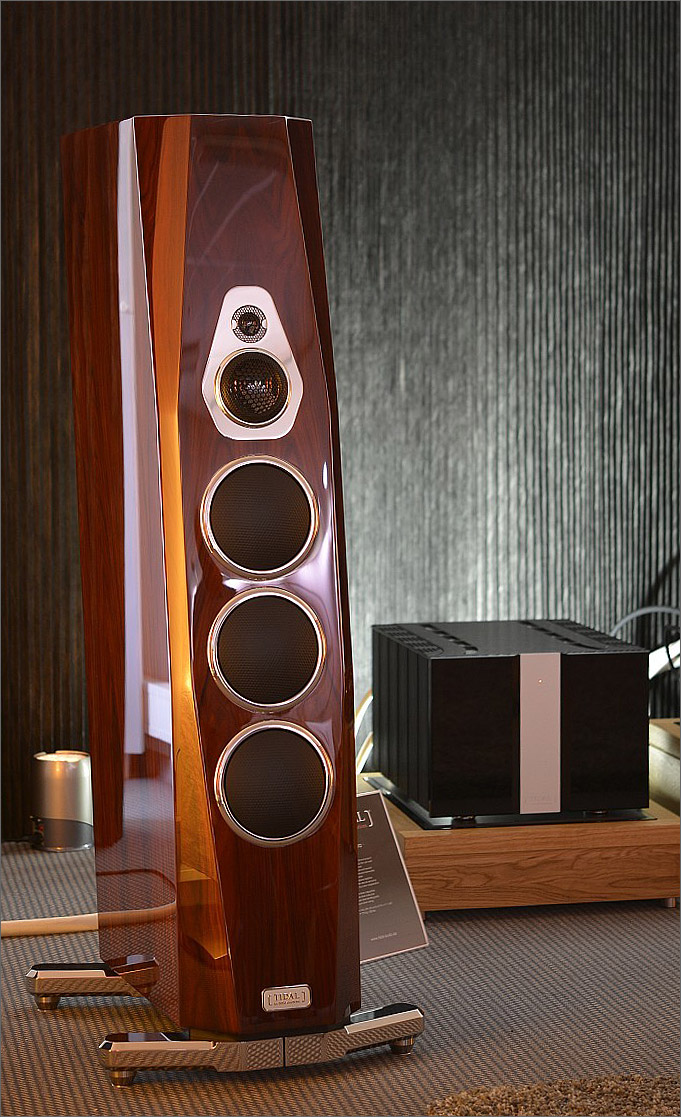 "The presentation of the TIDAL Audio Akira loudspeaker was unique at High End 2015 in being fronted by an all-TIDAL system: amps, DAC, preamp -- you name it, TIDAL produces it. The advantage was that TIDAL founder Jörn Janczak could get exactly the sound he wanted, because he controlled all the variables (well, he hadn’t built the room, but he had exhibited in it before, and knows its acoustics). The sound was TIDAL’s best yet at a High End show: clear, open, ultraprecise, never harsh.
The Akira lifted a veil from the TIDAL sound, which at High End has always been at least very good. For instance, I felt that cymbal crashes were true to life, without the whitish splash that many speakers produce. Another hallmark of the design was the perfect blend of the five drivers’ outputs, with no hint that disparate drive-units were handling different parts of the audioband.
Imaging? Superb: a Norah Jones and Willie Nelson track produced accurately formed images on a wall-to-wall soundstage. That track also made clear that the Akiras were tonally neutral, reproducing these singers’ distinctive voices without wavering. And their room-energizing bass showed that the Akiras had real dynamic punch when that was needed. My takeaway: TIDAL’s best speaker yet, and by no small margin." (Jeff Fritz, Soundstageultra.com) 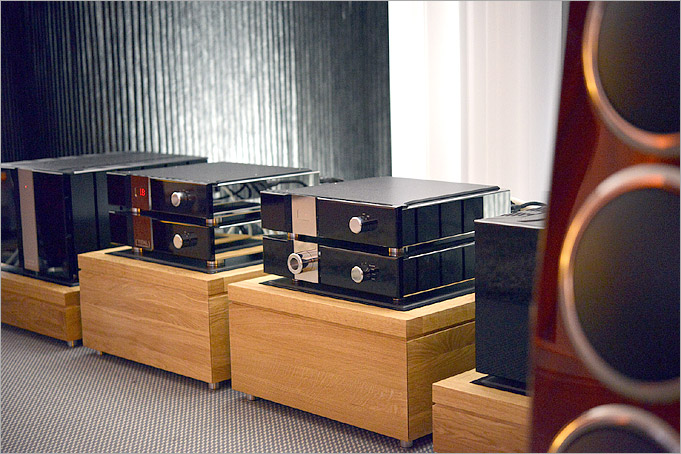 "The TIDAL Akira multiway has a passive radiator array on back that is user adjustable to suit your room and a 5" diamond mid/woofer with 7mm excursion (a joint project of TIDAL and Accuton). This single midrange driver crosses over from the active woofers at 150Hz and covers the entire range up to 6kHz, where it passes the baton to the diamond tweeter.
In other words, it is very nearly a single driver speaker. And it has the purity of same. Very fast, very delicate, very clear on tubular bells, percussion, and wood blocks with just the slightest bit of diamond tweet glare on the very top, but also with simply extraordinary timbre and resolution in the mids. An outstanding floorstander." (Jonathan Valin, The Absolute Sound) 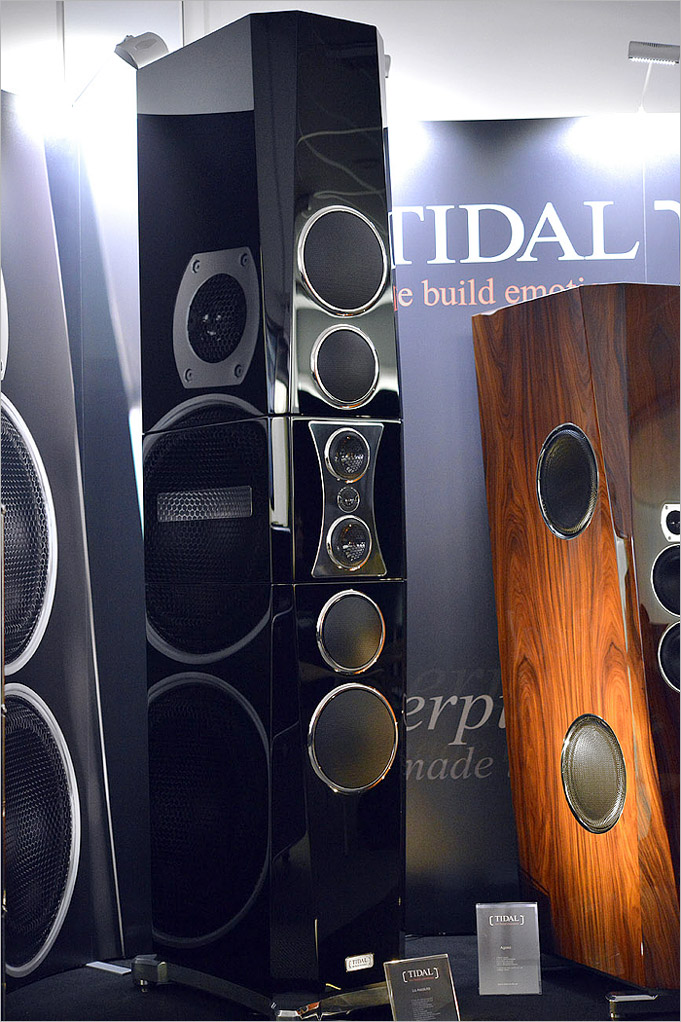 "Master speaker builder Jörn Janczak of TIDAL loudspeakers was among the first persons I had met when I came first came to Munich back in 2003 (the last show held in Franfurt before moving to Munich in 2004). Since that time Janczak has literally turned this show on its proverbial ear. Whether showing off his newest series of electronics or those magnificently finished loudspeakers (top photo), he's always got a trick up his sleeves that leaves me stuck in deep admiration. Debuting at this year's show was Janczak's most auspicious project to date: the nearly 8' ft tall La Assoluta. Sporting two of the world's only Accuton diamond midrange drivers, Janczak seemed quite proud of this latest design.
Noticing the I'll never be able to afford a speaker at that price look on my face, Janczak pointed to a far less expensive alternative in his newly introduced Akira loudspeaker. Sporting the same diamond midrange as its bigger brother and strapped to an all-TIDAL system, the sound was every bit as good as I expected from Janczak: bold, inviting and dimensional. In fact, I would want to place a little emphasis on dimensional since I think that's what separates the TIDAL loudspeaker brand from all the rest."(Clement Perry) 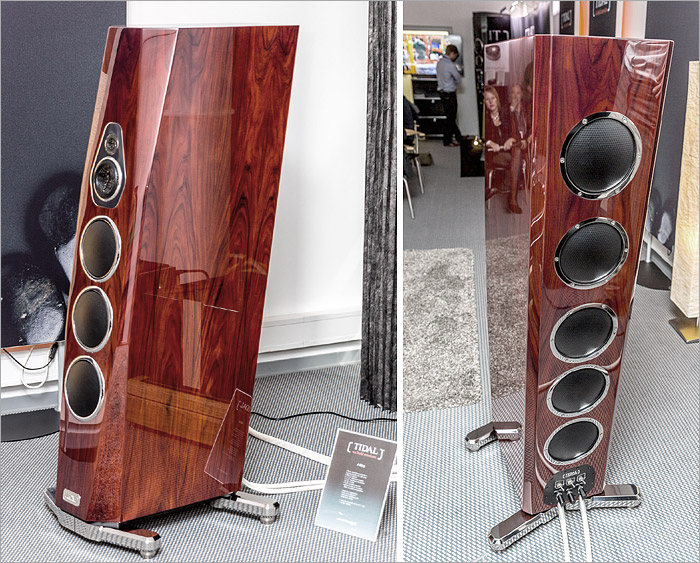 "Take the Assoluta, for example. This loudspeaker is (current) the pinnacle of his art, and it looks it. It’s also priced like it, but while €500k is nowhere near the most expensive loudspeaker available at High End, it was one of two where the attention to detail that caught my eye reached a level that made my brain start sweating. Oh, my, that TIDAL finish is simply out-of-this-world. I really have never seen anything like it. “TIDAL piano black” is to “piano black” as a black hole is to empty space. I could feel it sucking at my soul as soon as I stepped into the room.
I visited and revisited this room several times throughout the weekend, watching and listening as the great Akira broke in. And yes, I mean that – the magnificent 5” driver had all of 10 hours on it before the show opened to the press on Thursday! Not auspicious, but despite that, the incredible transparency TIDAL is known for was very much on display. And then some. Holy guacamole, this is a monster speaker.
I should note that TIDAL has never been one for bloated bass, so it’s probably not surprising that the bass was coherent and remarkably textured — that is, it didn’t necessarily get swallowed by the room, nor did it appear to flex the walls. A standing double-bass was just that — made of rare woods, professionally lacquered, lovingly polished Wednesday past with “the good stuff”, and yes, that G-string could probably use a replacement. Did I mention the sound was transparent? Hmm." (P. Karavakis, Theaudiotraveller.com) 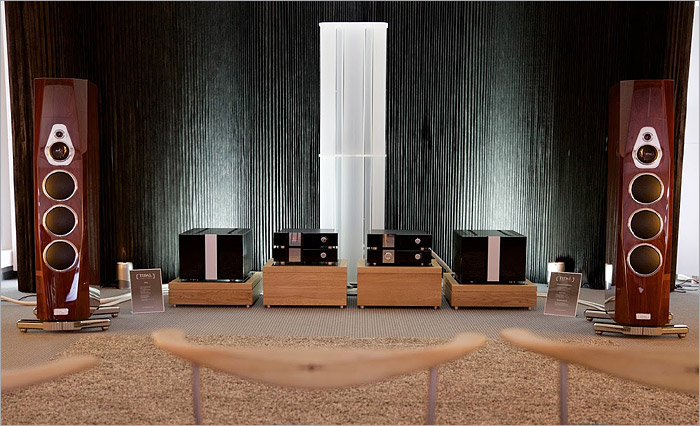 "Since its born the German brand was focused on building complex and big loudspeakers and the elegant Akira confirmed the TIDAL tradition. What that really hit us was TIDAL amplification with Presencio LS preamplifier, Camira DAC and Assoluta Monobloc.
The sound of this system leaved nothing to the fantasy, all was present in front of our eyes: not voices but singers, not sounds but instruments." 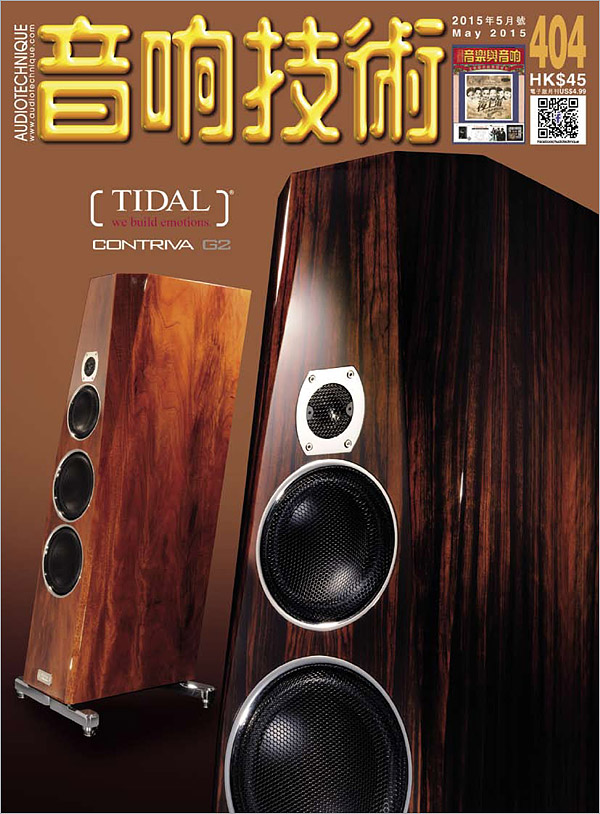 Not only receiving a great review and being praised as a wonderful product, also the TIDAL Contriva G2 is the new reference private speaker of the editor in chief from AUDIOTECHNIQUE magazine.

TIDAL Agoria “Product of the year award 2015” from HiFi Review.

The TIDAL Agoria pulled the "Best of the Year Award" trick again... 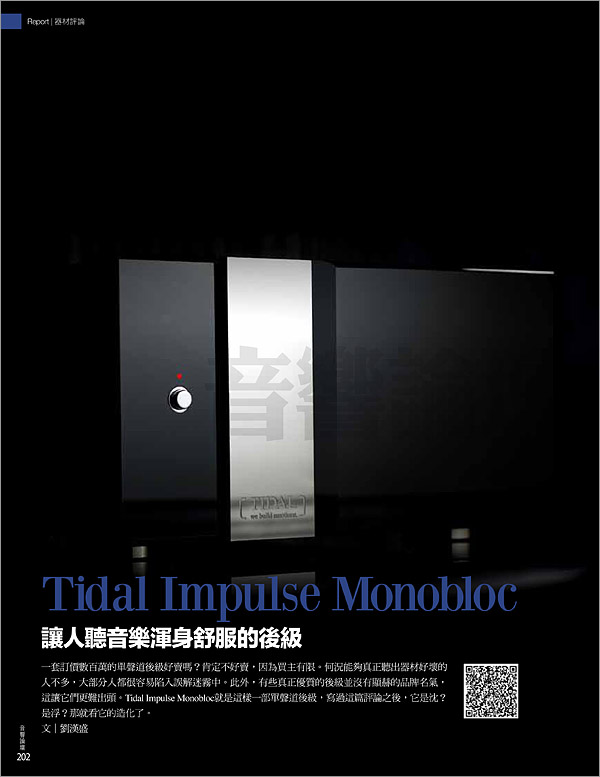 "....With various recordings one can hear constanty an amazing level of neutrality of its own class and an excellent soundstage. Neutral means natural and without any effects. It is fast, but not rushed, it offers excellent control, a strong 'push', but not being rough. It sounds very relaxed, open, sweet, when needed very shiny, when needed very large and has a very clear sense of the sound field itself.
The Impulse Monobloc has a ifelike resolution and enough power to sound realistic anytime and it does not tire the ear at all. If I can say a conclusion after amazing hearing sessions, then it is: one can listen to any kind of music on the highest comfortable level in excellent quality without any kind of harshness."