"....No matter how good or expensive this or any amplifier is, they all require a source to play from, and a good pair of loudspeakers to show off their remarkable harmonic prowess. I think they came very close to achieving this goal with the speakers they chose for this event. The TIDAL Piano Cera's are not cheap though they reside nearer the smallest and least expensive of what the company builds.

That said, I have visited their facility in the city of Cologne, Germany. It was here where I found its designer Jörn Janczak, used the same expensive parts internally as in their top-of-the-line $150k Sunrays.
To me, that means a lot in terms of what one should come to expect from TIDAL and their least expensive pair of loudspeakers.

As a result, I find the Piano Cera's to be among the most neutral sounding - yet full-bodied - loudspeakers to grace my listening space and as a result have officially used them as a reference in their price class (and am certain they perform way beyond their asking price)."

"The Constellation Audio value-oriented Performance components paired with the TIDAL Contriva Diacera loudspeakers reproduced some of the most sublime music at the show."

"Constellation Audio introduced its new “budget” line of electronics in the company of TIDAL’s gorgeous three-way, ceramic-and-diamond driver Contriva Diacera, and made the best sound I’ve ever heard from a TIDAL loudspeaker. ... dynamics and resolution of detail were simply superb."

Review of the TIDAL Sunray 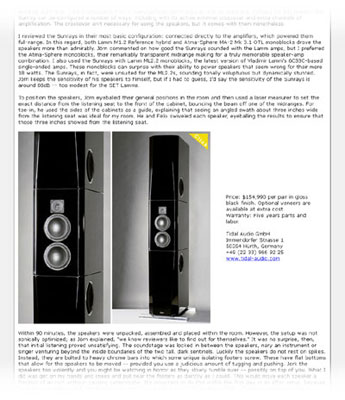 "An assault on the state of the speaker art that honors the music."

...A more relevant face-off for admirers of the TIDAL sound is between the Sunrays and the Contriva Diacera SEs, which I reviewed more than a year ago.

I expected that the Sunrays would be more accomplished than their smaller, less expensive brethren, owing to the ambition of their design, their sheer size and their driver complement, but their performance was significantly better in every way.
They sounded bigger, more transparent (especially through the midrange), and wider in bandwidth...

They also revealed more about each piece of equipment in front of them, but unlike speakers that are ruthless in the way they expose such variation, the Sunrays always sounded composed, always made deeply involving music....
...After spending months with the Sunrays, I get it. These are uniquely revealing and musical speakers whose spatial characteristics and tonal sophistication befit their stature and unusual design.
More than enjoying the Sunrays, I valued them as an alternative to so many big, expensive speakers whose promise goes unrealized for one reason or another.

(You can find the whole review at > SPEAKERS > SUNRAY > SPECIFICATIONS)

Stereotimes.com:
One of the Best Sounding rooms at this year's event goes to the TIDAL Piano Cera loudspeakers, Presos preamp and Impact amplifier. Digital playback was by way of a dCS Puccini/UClock combo and the overall sonic effect was refined, smooth and ultra-musical. In a word: EASY.
I've grown a strong affection for these Piano Ceras over the years and now have a pair under review (stay tuned).
My time spent has only deepened my respect for TIDAL products and its designer Jorn Janczak.

I noted that the system was well composed on even the most complex and dynamic musical peaks. There was plenty of refinement too.

...The Piano Cera is not only a very musical loudspeaker, but the same time also an instrument to judge the quality of the recording itself. This means, if the musical content and expression itself is alright, then the TIDAL's will transport this to 100%, without hiding the flaws of the record.

... I lost myself in descriptions of music, even if this review is supposed to be about a loudspeaker, why is that? Well, this is the biggest compliment I can give any loudspeaker. It is all about the fun of music, and not only about "locating the triangle at tact 37, two meters behind the timpany-guy in perfect timing every second beat". And exactly for that is the Piano Cera the right musical instrument!

Don't forget: you can hear all details and for sure the mentioned triangle we talked about, you can locate it even to the millimeter, but the physical presence of the speaker itself is completely invisible and does stand completely behind the musical interpretation - this is the big strength of the TIDAL's.

Conclusion
The owner of the Piano Cera will in most cases close the chapter "loudspeaker", because with its flexible room adaption for almost all rooms - whether small or bigger ones - this transducer let speak the music itself.

"... 'The Voice That Is' is the name of a Newtown Square, PA, retailer and when I walked into their room, I had no idea what equipment I was listening to, as it was - again - totally dark!

But the music playing, Stevie Ray Vaughan's "Tin Pan Alley," took me back a quarter century, when all you heard at audio shows was this cut. But it never sounded this good back then!

As my eyes accommodated to the darkness, I could make two pairs of TIDAL speakers, the floorstanding Piano Diaceras behind stand-mounted Ameas. Both feature ceramic-cone woofers and a diamond-dome tweeter but it was the Diaceras that were playing,connected with Argento cable to a TIDAL Impact 140Wpc stereo amplifier and a TIDAL Preas preamp. Source was a MacBook Pro feeding USB data to a dCS Debussy D/A.

As if to confirm that it was 1987, the next track played was "Le temps passé" from the Michel Jonasz CD L'Histoire de Monsieur Swing. This is what I am talking about - a huge, stable soundstage, extending way beyond the speaker positions; smooth, grain-free highs, tight, tuneful, deep lows, and a pure, coloration-free midrange - and all of this in service of the music, adding to the experience instead of substituting for it.
It doesn't get much better than this!"

"The room was not just special, it was damn near perfect....

...the decor, setup and gear were spectacular. The sound quality? Absurdly good. Doug White, president of The Voice That Is, totally hit it out of the park with this setup.

The look and feel of this unit, and the matching Impact stereo amp, were truly bespoke. Every exposed surface gleamed piano-black or liquid silver. This is some seriously upscale gear and quite easily ran away with the CAF 2011 Beauty Contest crown.

All TIDAL speakers feature custom-made-for-TIDAL Accuton drivers that were neither cold nor harsh (a criticism I’ve heard about ceramic drivers generally but still have yet to actually hear in person) but very linear and totally neutral.

While both speakers had a very full sound, the most arresting thing was how they nailed up a sound stage that had pin-point imaging and crystal-clear sonics. Ever heard how reviewers will trot out the cliche about how a given component provides “an open window on the music?”. Well, the sound in the TIDAL room is going to make me dig up another one: “What happened to the window?”. 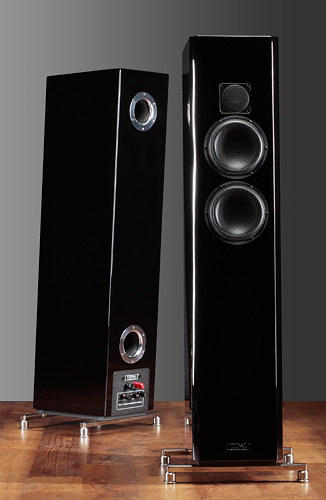 "Conclusion:
The TIDAL Piano Cera is one terrific-sounding loudspeaker. It’s transparent and quick, and plays with more weight and depth in the bass than you would ever suspect from a glance at its driver array. In fact, looking at this speaker either on paper or in photos will give you no hint of the performance lurking beneath its rather simple but elegant appearance.

There is a ton of clever engineering inside, and that technical expertise translates into audible results. I think the TIDAL Piano Cera would be a great choice for someone with a midsize room who doesn’t need a speaker that makes a "statement" -- except when it’s playing music."

(The full review you can read it of the page of the Piano Cera itself.) 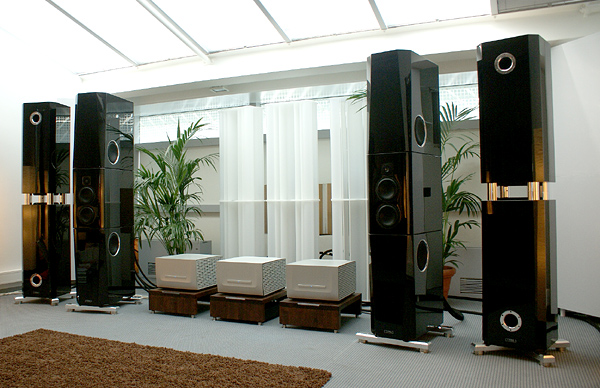 "German speaker company TIDAL and Constellation Audio of the USA teamed up to produce an absolutely stellar sound at this year's show. The TIDAL T1 double-stacked loudspeaker represents designer Jörn Janczak's best.
Constellation Audio boasts a look and feel that is as wonderful as its sound. This is my first time writing on these electronics because it's really also my first time hearing them. If these pictures don't provide you enough...here's a short video I took also here. " 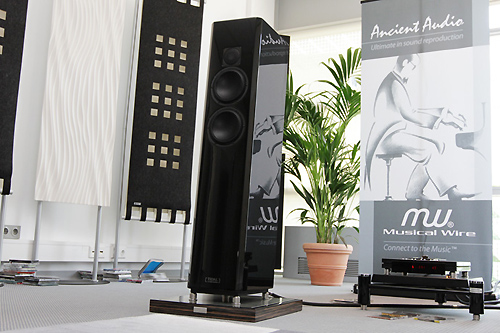 "...What would you say if I told you that the state of the art in loudspeakers can be purchased for half, or even a quarter, of the price you might think? Not really good speakers. Not almost-the-best-you-can-buy speakers. But state-of-the-art speakers. As in better than what was available just a few years ago at crazy six-figure prices! Would you be surprised? Excited? I submit to you that we are in the midst of a speaker revolution. Case in point...

"Priced at 15.500 € per pair, the Piano Cera shrouds its sonic prowess in piano-black lacquer of a quality that is quite uncommon. In fact, the slim proportions easily conceal that this is a 117-pound speaker built quite heroically.
Even still, there are no exotic cabinet materials and the drivers are made to TIDAL's specs by Accuton, another German firm. That description doesn't sound state of the art. When it plays music, though, is when you begin to understand that this is no plain-Jane loudspeaker.

With bass articulation and weight that belie its modest proportions and coherence that is nigh-on perfect, the TIDAL Piano Cera is a stark reminder that the underlying design -- not the cosmetic flourishes or the story -- is ultimately what is key to sound quality.
The Piano Cera isn't just different from most other speakers I heard at High End 2011; it's better." 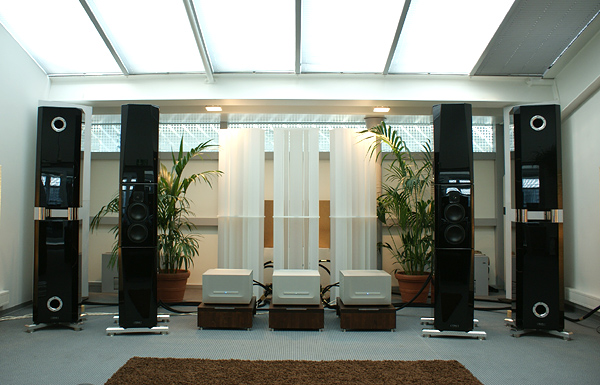 "Visiting the TIDAL room was like taking a bath in music - this describes it the best! One had much better mood when leaving the room then one had when entering it...". 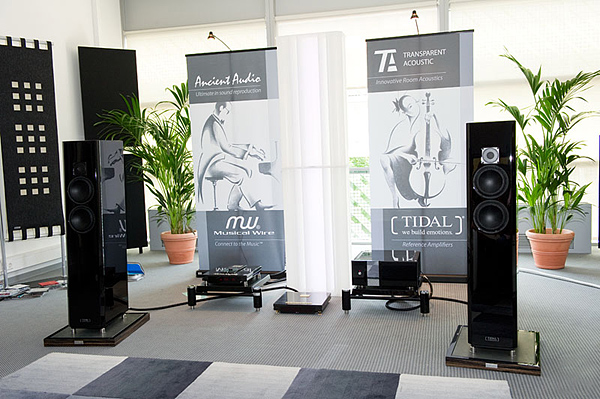 "...my clear favorite was the collaboration between Ancient Audio, TIDAL and Musical Wire with the smaller TIDAL speakers organized by Dmitry Valdin of Transparent Acoustic whose banner-type room treatments graced the room's sidewalls."

Prev page
123456789101112
Next page
We use cookies on our website to give you the most relevant experience by remembering your preferences and repeat visits. By clicking “Accept All”, you consent to the use of ALL the cookies. However, you may visit "Cookie Settings" to provide a controlled consent.
Cookie SettingsAccept All
Manage consent

This website uses cookies to improve your experience while you navigate through the website. Out of these, the cookies that are categorized as necessary are stored on your browser as they are essential for the working of basic functionalities of the website. We also use third-party cookies that help us analyze and understand how you use this website. These cookies will be stored in your browser only with your consent. You also have the option to opt-out of these cookies. But opting out of some of these cookies may affect your browsing experience.
Necessary Always Enabled
Necessary cookies are absolutely essential for the website to function properly. These cookies ensure basic functionalities and security features of the website, anonymously.
Functional
Functional cookies help to perform certain functionalities like sharing the content of the website on social media platforms, collect feedbacks, and other third-party features.
Performance
Performance cookies are used to understand and analyze the key performance indexes of the website which helps in delivering a better user experience for the visitors.
Analytics
Analytical cookies are used to understand how visitors interact with the website. These cookies help provide information on metrics the number of visitors, bounce rate, traffic source, etc.
Advertisement
Advertisement cookies are used to provide visitors with relevant ads and marketing campaigns. These cookies track visitors across websites and collect information to provide customized ads.
Others
Other uncategorized cookies are those that are being analyzed and have not been classified into a category as yet.
SAVE & ACCEPT